When I interviewed a classmate, Cory, I felt very important like I was really determining if she got the job or not. I do feel that seeing an interview from the employers perspective does prepare you for a real interview because it shows you the type of questions they will ask and the type of questions they want to know the answer to, it also helped me know what was and what wasn’t what the interviewer,who was me at the time, wanted to hear. Being interviewed by a classmate was very interesting because I know them personally and I had to act like they were determining whether I will or will not get a job. I didn’t feel as nervous or anxious as I would of at a real interview because I felt comfortable with her and I know her from class. I feel like some of my responses were delayed and could of been better and more thought out in advanced, I also wish I didn’t use the works, “like” and “um” so much and I would of sounded a lot more professional. Some advice I would give to others doing the mock interview would be to take it seriously because it is good practice and to prepare like its a real interview. If it was real I would of prepared answers to questions I was likely to be asked. I would dress in appropriate clothes that were nicer and more business casual, and I would behave confident and professional throughout the whole process. This is defiantly a skill you need in real life because you have to know how to act in an interview to get a job. If an interviewer asked me to tell him about myself a good response is to give detailed examples on how I am responsible and why I think I am right for the job. A bad response would be to go into detail about something irrelevant to the job you are interviewing for. 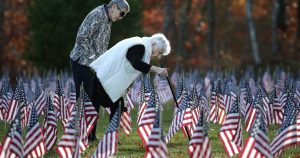 Veterans Day is celebrated on November 11th, this day is celebrated to honor the people who lost their lives fighting for our country.  This includes honoring the members of the US Army, Navy, Marine Corps, Air Force and the Coast Guard. In most states schools are closed for this national holiday. People celebrate this holiday by visiting hospitalized veterans, writing thank you letters to thank troops, performing chores for disabled veterans, and even organizing social events to honor veterans and fundraisers to raise money to buy better equipment and better living conditions. This is an important holiday to celebrate to remember the people who fought for not only our country but the people in it, I don’t do anything specific to celebrate this holiday but throughout the day I am thankful for what so many strangers willing did just to protect so many people they do not even know personally. This holiday is defiantly something that should continue to be celebrated because the people who did the amazing things they did for this country deserve to be remembered and celebrated forever and not forgotten or less appreciated by the holiday not being celebrated anymore, this holiday is also something that is important to a lot of people who lost family members in war deserve to have a day dedicated to their memory.

Serena Williams is a American professional tennis player. The Women’s Tennis Association has ranked her number one in the world in singles on eight separate occasions over the last 15 years from 2002 to 2017. Serena Williams has won the second most amount of titles in the popular tournament, Grand Slam. She also has modeled for Vogue, she has competed in the Rio Olympics, Serena Williams has done all of this by the age of 36 years old. Serena also has her own website where she talks about the amazing things she has done in her life and the background of the things she has done. When she talks about her fashion line  on her website Serena says “My designs are inspired by all women. I want women to know that it’s okay to love and embrace who you are… to be un-apologetically bold and beautiful in anything you’re wearing. Through HSN, my Signature Statement collection is about empowering fans everywhere to connect with this message.” ” She has done so much not only as a tennis player but as a contribute to society. Not only is Serena a 3 time  Olympian but she is also a mother, she has a daughter named Alexis. Serena has a fund going towards creating equity towards educations and assisting victims of senseless violence. Serena has proven to make a huge difference and is so looked up to by so many people all over the world for  her amazing accomplishments.

What is your social issue? The social issue I did research on is animal abuse.
Why is it such a social issue? What do people disagree about in relation to this topic? This is a social issue because a lot of people have strong opinions on how animals are treated and how they feel it should be changed , there are groups of people that come together and fight for animal rights. Some people believe that animals should used for testing and that it is necessary for humans to torture animals  for our benefit, but others disagree that animals should be better and not be used for testing or be put in bad conditions for human entertainment.
What is your proposed solution? Why do you think this is the best solution? Animal testing being made illegal is the first thing that would create a big solution to the problem, with that law animal cruelty will be stopped (mostly) in that department and it would also help companies gain costumers because lots of people boycott products tested on animals.
What are pros to your solution? Pros to this solution include, less animals being put through horrible processes for no reason, it could improve quality of the process of testing products before they are put on shelves, this solution will force companies to find a safer more reasonable way of testing products. This will stop the boycott of products and help business owners to increase their buyers and profit.
What are cons to your solution? The cons are it would affect a lot of companies and how they are able to test their product. It will cause controversy between a lot of people and could affect if they are even able to continue their company
Any questions to your audience members for help on your topic?

What are your opinions on animal testing? Using animals for entertainment in bad conditions? 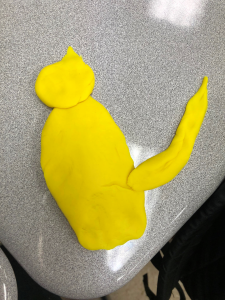 The item I created with the Playdoh was a cat. This is representation of all animals, animals are important to me because I feel like they have such a postive impact in peoples lives and help people out in many ways and don’t get anything in return because of the fact that they are animals. Someone in my class made a guitar to represent their love for music, this was unique because most people would use a music note or microphone or something more general to represent music but they used a specific instrument to show not only their love for music but something in the music category that they love. Bryce made a baseball because the love for the sport represents a big part of who he is. This process of using Playdoh to create something meaningful or to represent something is just like the process of writing because you first have to plan out and visualize exactly how you want your piece to come out just like if you were writing a paper, then you have to brain storm how youre going to get it to turn out the way you want all before you actually start the process of making it just like in writing, its all about planning before you actually start. Once you start to make your idea you tweak and perfect it as you go along so you can get the full affect you visualized before starting just like in writing, as you re read you re write and fix mistakes.

Welcome to your brand new blog at Edublogs!

To get started, simply visit your blog’s dashboard, edit or delete this post and check out all the other options available to you.

We can walk you through step-by-step in our guide to getting started with your blog.